This past week, the Plainview FCCLA chapter traveled to Northeast Community College for the District 8 Leadership Conference.  The theme for this year’s conference was “OHANA means family.  Family means nobody gets left behind or forgotten.”

The day started off with the State Officer Candidate test followed by the opening ceremony. The welcome was given by District President, Dylan Widger and by the hosting school’s Chapter’s President Katelyn Stewart from Crofton.  The District Officer Installation was then held with Jadin Doerr being installed.  The keynote speaker for the day was Allison Krieffels. Krieffels talked about learning who you are and emphasized the importance of taking advantage of opportunities that are presented to you.  Opportunities come in various ways…some positive and some negative.  Nevertheless, take those opportunities, whether you want them or not, and make the most of them. Find the positive in the situation and inspire someone else.  She also reminded students to be the “best version of yourself” as you never know who your are impacting. 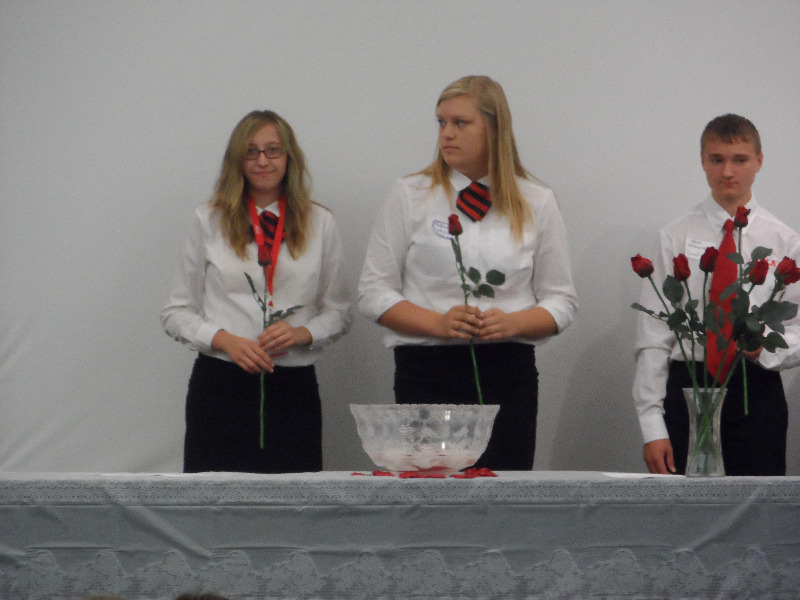 5636cbd8bb0a2Jadin Doerr being installed as District Officer
Jadin Doerr being installed as District Officer
Following the keynote speaker was the traditional badge exchange. Each chapter brought a little gift to share with members from surrounding chapters. This was one of many ways members were able to meet those from area chapters.

Each year, there is a creed speaking competition where a freshman from each school memorizes the creed and gives a speech explaining their interpretation of the creed. Representing Plainview was Andrea Haase. She was presented a certificate of participation during the closing session. Caiti Ziegenbein, Chapter President, represented the chapter as Voting Delegate and attended the State Officer Candidates Interview Session and cast the chapter’s vote.

During lunch, members could participate in the bucket auction and the “Jail and Bail”.  By donating a dollar, a student could put someone in “jail” for two minutes or the person could pay $2 and “bail” themselves out.   The money raised from both events will be donated to next year’s state officers and national STAR participants to assist with travel expenses to National Conference in July.

The District Outreach Project this year focused on Bright Horizons. Bright Horizons provides resources to survivors of domestic violence, sexual assault, stalking and dating violence. They serve 10 counties in Northeast Nebraska and have emergency shelters (30 day shelter) in Norfolk and O’Neill.  Bright Horizons announced they are now opening a transitional shelter (6-12 month stay) for families working to rebuild their lives after leaving the emergency shelter.   As Bright Horizons is funded through grants and private donations, each chapter decided to bring currently needed items to the conference.  Collectively these hundreds of items were presented to representatives from Bright Horizons during the closing session.

The yearbook and scrapbook awards were also announced. Caiti Ziegenbein completed the Chapter Yearbook and accepted the 2nd Place Certificate for the chapter.   Ending the day was the drawing of door prizes/baskets and announcements.