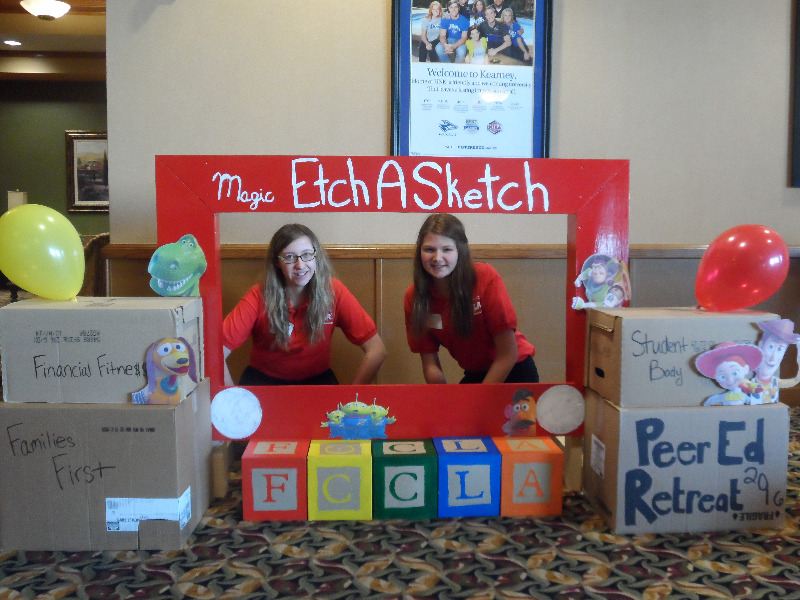 The Plainview FCCLA chapter recently attended the annual State FCCLA Peer Retreat held in Kearney Nebraska on Monday, February 29th. There were over 300 FCCLA members and advisers from over 40 chapters from across the state in attendance.  Jadin Doerr, Andrea Haase, and Adviser Ronita Jacobsen attended from the Plainview chapter.

The theme for the day was “To Infinity and Beyond!” This theme took its’ inspiration from the movie, Toy Story, which also coincided with the charity that was being benefited “Love Adelyn”.  Inspired by the death of their daughter Adelyn, Love Adelyn is an organization that was founded to raise Congenital Heart Defect (CHD) awareness, and to help ill children in need.  They currently have several goals for the year, among them being to make and distribute 100 activity packets for children in hospitals in Nebraska as the family lives in Northeast Nebraska.  The Plainview FCCLA chapter donated numerous items to assist in meeting this goal as 1450 items in total were donated that day.

The conference began with introductions of the current Peer Officers who gave a brief overview of each National Program they represent.  Introductions of the peer team finalists for the coming year recognized those students who will be vying for the three teams in April at State Conference.

The keynote speaker was Neil Halford, who presented “Victim or Victor.”  Neil was a former wrestler, earning his way to Nebraska State Wrestling. The only catch?  An accident when he was two years old left him blind.  In his session, Neil shared his inspiring struggle and journey of his success.   Throughout is presentation he emphasized setting goals, working to achieve them, overcoming obstacles,  positive attitude, and never giving up.

The first breakout session was Sara Giboney who is a health coach in Kearney, NE.  She own her own business “Sweet Success Health Coaching” and presented  “Passion + Hustle….Creating a career that brings you joy”.  She spoke on creating a career that brings you joy.  Giboney explained that although she has a degree in journalism and this is where her career is, that her true passion lies with fitness and motivating others. Her interest in personal fitness led to writing her blog “Sweet Success”.  She then worked on becoming a fitness instructor, obtaining a degree in nutrition, and now is a personal health coach.  She has done all this while working in her current career as a journalist.  She provided students with entrepreneurial advice of creating your own opportunities, money management, taking small steps, and trusting that setbacks will eventually move you forward.  A quote of hers was “run like you are on fire in the direction of your dreams”.

Royal Family KIDS, Camp Directors Tracy and Angee Hock from Kearney/North Platte, NE Camp spoke at the next breakout session.  Their session “Treating Every Child like Royalty” explained how the Royal Family KIDS is a nondenominational faith based organization which offers a one week summer camp for kids 7-11 years of age who are in the foster care system.  Camps are offered across the state of Nebraska and the United States.  They spoke on the positive impact the camp has on these children.  This camp is offered at no charge to the campers who participate in a variety of activities such arts/crafts, fishing, paddle boats, canoes, theme based parties/events, and always a birthday party night where each camper is given their own birthday cake. For some, this is their first birthday party and cake.  The camp is funded by donations only and volunteers are always needed.  Anyone over the age of 18 can volunteer to work at the camp after meeting their 12 hours of training.