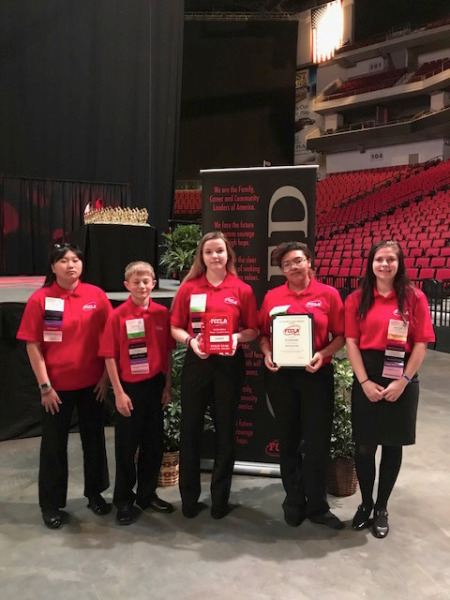 Conference began Sunday with registration and members donating school supplies as part of the FCCLA State Officer Outreach Project.  During Opening Session, each chapter was given a moment for a “shout out” of recognition before keynote speaker Ryan Moran began his presentation.  Moran “Superman” taught members about POSSE:  Be Positive, Open, Sincere, have Spirit, and don’t Exclude people.  He left everyone energized and ready for action. 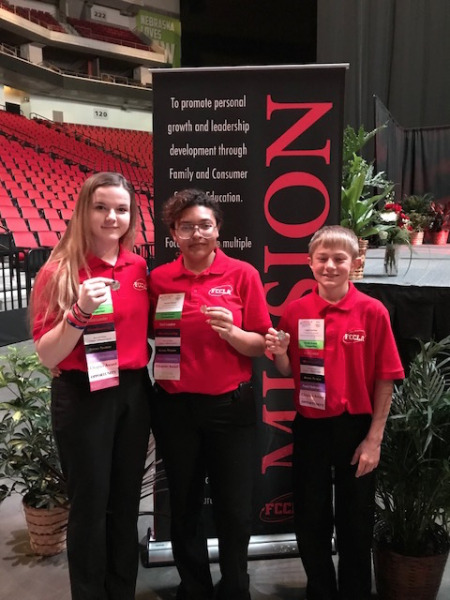 5ad404d727401Jesica, Aaliyah, and Logan with their STAR medals.
Story image 2_1Story image 2_2Story image 2_3
Jesica, Aaliyah, and Logan with their STAR medals.
Monday was a busy day as members were competing in STAR Competitions, participating in service projects, and attending sessions and trainings.  All STAR Competitors had orientation at 8 am and then State STAR Competitor Logan Jacobsen was up first competing in Recycle Redesign Jr. Division at 9 am followed by Aaliyah Brown at 11 am.  Jesica Schaefer competed at 1:30 in her event Life Event Planning.  STAR Results and Awards were announced Tuesday morning during the STAR Awards Session. Jesica Schaefer and Logan Jacobsen received silver medals in their events.  Aaliyah Brown received a bronze medal in her event.

Members not in STAR were busy with service projects and tours on Monday.  Ashlynn Ickler participated in the Lincoln Children Zoo service project. She spent the morning with other members from across the state cleaning up the zoo.  When done, they had time to tour the zoo itself.  Jessica Stark joined other members to take a tour of the UNL Campus. 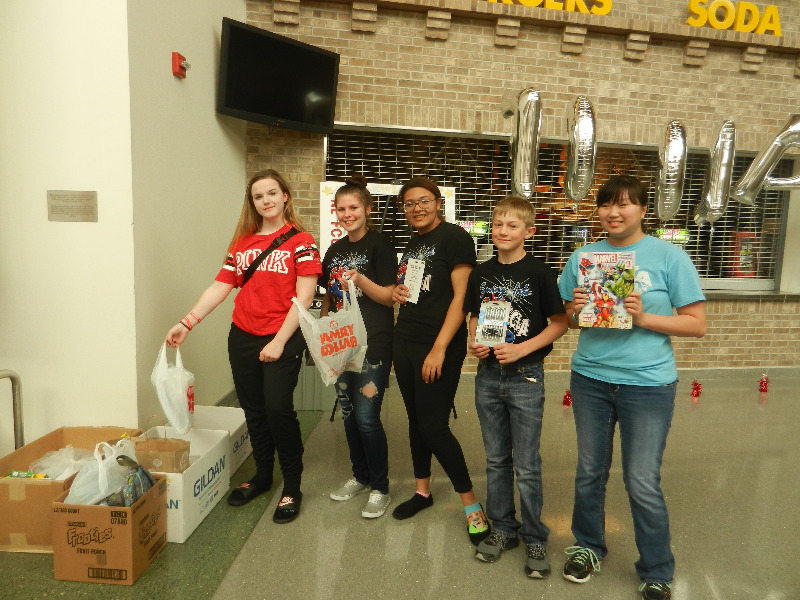 5ad404d727401Members donating school supplies for the State Outreach Project.
Members donating school supplies for the State Outreach Project.
All member on Monday took advantage of the Opportunity and Career Fair to visited with college representatives and organizations.  While at the fair, a variety of opportunities were available for students as they learned about nutrition as they rode the blender bike to make a smoothie, ground wheat for bread, and wore virtual reality goggles to demonstrate the influence of alcohol on driving, learned about dressing for interviews, discovered relationship training programs, etc.   They were also attended breakout sessions such as: the Power of Social Media, Lower Your Stress by Defining Your Win, Building your Personal Leadership Brand, Tracking Your FCCLA Journey with the Nebraska FCCLA State Degree, and Healthy Relationships-VERIFY (Voices Encouraging Relationship Integrity for Youth)

Later that day, Aaliyah Brown represented the chapter as Voting Delegate.  Her responsibilities included attending the Voting Delegate Session, hearing State Officer Candidate speeches, and watching the candidates complete a “Fishbowl Activity”.   She was responsible for casting the chapter’s ballots during that evening’s Business and Recognition Session.

During Monday night’s Award’s Session, the Plainview Chapter was awarded the Chapter Award-Gold Star Plaque, which is the highest rating available for chapters.  The award reflects FCCLA members’ Program of Work for the current school year.  To earn this award, members set realistic goals for themselves and conduct a balanced chapter program of work that is related to the family and consumer sciences program.  The chapter had 12 specific tasks they needed to complete and document in the following areas: Membership, Leadership, Competitive Events/Programs, and Promoting FCCLA.

The chapter also received the Red Chapter Award for the Red and White Chapter Affiliation Award.  They also received recognition for the work they completed in National Programs, Feed Nebraska, Membership, and Red Leader.  Adviser Ronita Jacobsen was also recognized for mentoring a new FCCLA Advisor and for becoming a member of the FCCLA Board of Directors.

“I am very proud of our performance at state this year. Our State STAR qualifiers are all new members of FCCLA and took on challenging projects.  They had a lot of competition in each of their events with experienced STAR presenters and national qualifiers.  Talk has already begun about their projects for next year!”, stated adviser Ronita Jacobsen.