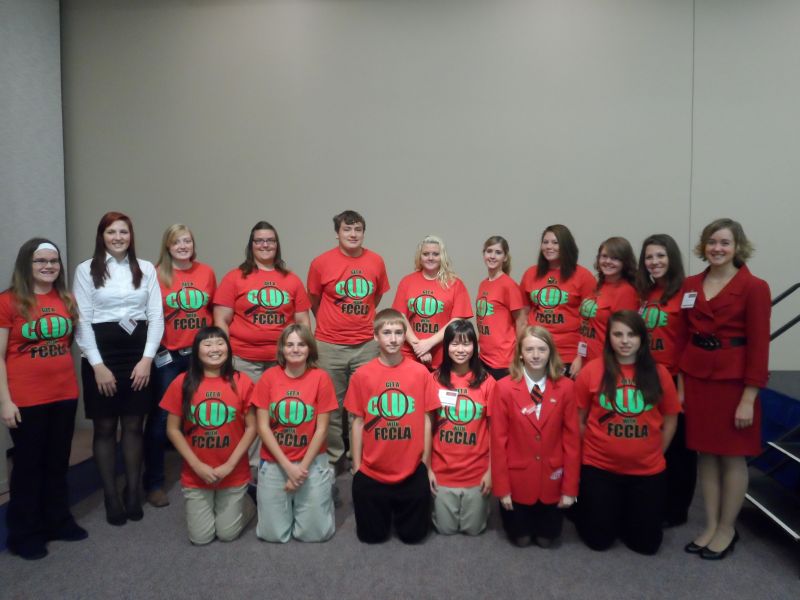 The opening ceremony began with introductions with Ashley Shaffer introduced as one of the State Student Body Team Peer Education Officers.   It also included the Installation of 2013-2-14 District 8 Officers. Caiti Ziegenbein was installed as a District Officer with the title of Peer Education.  As district officer, Ziegenbein had several key speaking parts in the program throughout the day.

The keynote speaker was Melissa Dearmont who spoke on “Living by the Cowboy Cody of Ethics”.  Her presentation included five key principles in which to live by.  Following the keynote speaker, a badge exchange/meet and greet was held.   State officer candidate thought questions and announcements were given prior to breaking into smaller sessions.  Ashley Shaffer presented during the Round Table Session on the Student Body Peer Team. Heidi Nelson represented the chapter as Voting Delegate and attended the State Officer Candidate Session where the candidates were interviewed and presented their speeches. Natalie Lingenfelter attended the Nursing college tour while Sharyn Sheppard, Breanna Hoffart, and Caiti Ziegenbein packaged meals for Mercy Meals.  During 1-½ hours they helped to package 5100 meals.

Small breakout sessions for other students were held.  Sessions included Shaken Baby Syndrome (SBS), where a parent spoke on how her life and her son’s has changed drastically since her son was a victim of SBS at his daycare 9 years ago.  Tyler Legate, UNL Football Player, from Neligh spoke on commitment and decision-making. Male State Officer Chandler and Viktor presented a session titled “What guys think of mean girls”. 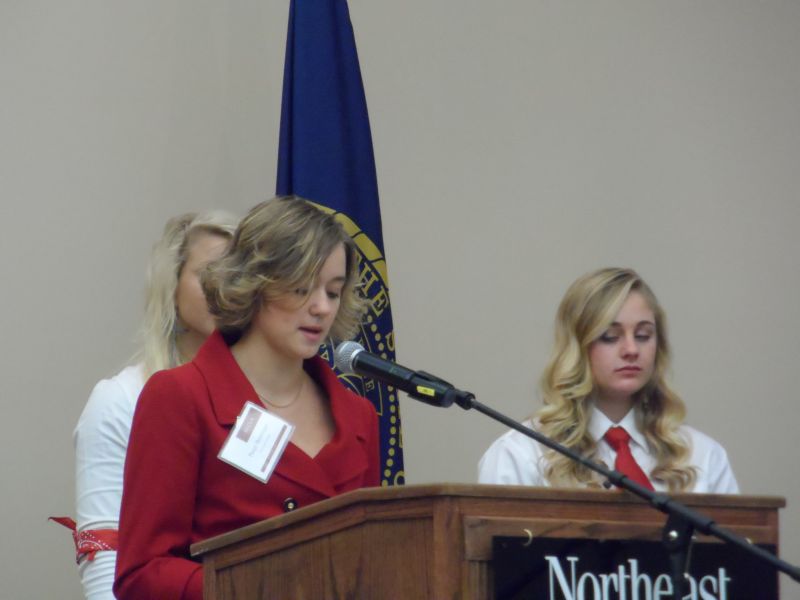 During lunch students had the opportunity to purchase tickets for bucket auction items with the proceeds helping fund the meals packaged for Mercy Meals.  Additionally, students were able to participate in a “Jail and Bail”.  For $1 students could send another FCCLA member or their adviser to “jail” for 10 min where they could either serve out their sentence or bail themselves out for a $1.  By the end of the day, $108 was raised through Jail and Bail and $232 was raised through the bucket auction.  All proceeds will go towards the Mercy Meals packages.

During the closing ceremony members who completed a Power of One project received their certificates. Ashley Shaffer, Heidi Nelson, Erika Newman, and Kaelee Van Every received certificates for their projects.  Graduated senior, Morgan Johnston received special certificates for completing all 5 modules. Plainview received Certificate in the Chapter Yearbook Event    Heidi Nelson created the Chapter Yearbook.  The last events of the day included door prizes, a slide show, and the announcement of State Officers.