The theme of the conference was “Facing the Future Building on the Past”.  Keynote Speaker Tom Koch kicked off the conference. He had 4 key points to his presentation. The first point was “happiness is an inside job”.  He explained that happiness is unique to the individual. He asked members to consider what is that they think about or what they want that makes them happy.  He stated that achieving a goal isn’t as much fun as the journey a person takes achieving it. He asked them to think about happiness in terms of: “What does it look like? Sound like?  What steps do you take today to put you on your path to happiness?  He concluded that point by saying, “Be the change for those that come after you.”  Koch’s second point dealt with “Respect….is an important skill or attitude to acquire in life.”  He explained that we can’t control what happens, but we can control our response.  He also said that respect leads to better communication.  Respect in communication is important not only in person but also in our electronic communication. Point Three was about Career Advice:  He gave the following advice to members: “Be curious.  Be a lifelong learner. Work hard and get good. Opportunity is missed by most because it looks like overalls and involves a lot of work.”  He continued to say that “You are capable of anything.  Fear holds us back. Get uncomfortable.  Bloom where you are planted and respect yourself.” Koch’s last point was “Experience the emotion of gratitude”.  He said that gratitude is an emotion that doesn’t come automatically.  People have to practice the art of being grateful. When we feel grateful, we feel better. He asked members to think about things they should be grateful for. He asked them to pause, still the mind, and ponder a bit about what they should be grateful for. He concluded by asking members to finish the statement “I am grateful for?” 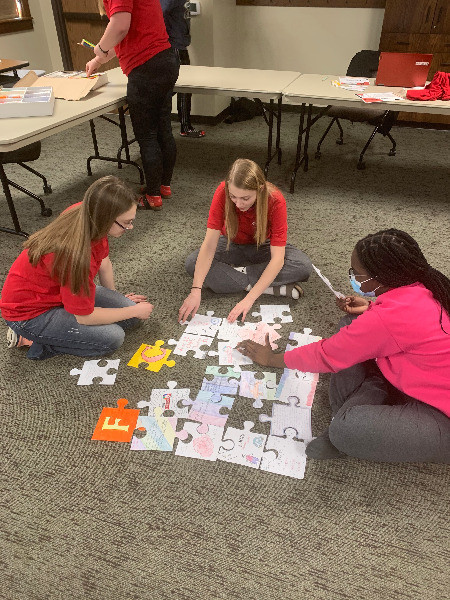 Launch the media gallery 3 player
Members also participated in 3 breakout sessions. The first was a training from MADD.

The mission of MADD is “No More Victims”. It has four components:  1) end drunk driving 2) prevent underage drinking 3) help fight drugged driving 4) support the victims of this violent crime.  They explained the dangers involved with alcohol and provided statistics on deaths that are alcohol related. They also explained the addiction of alcohol.  They also spoke on the myths of Cannabis that they typically hear from students during presentations.  They also spoke on why people choose to drink or use other addictive substances. They reinforced the fact that “just because it is legal (alcohol), doesn’t make it safe”.  Healthy coping mechanisms were shared along with the most common unhealthy ones, as poor coping strategies were related to alcohol use and addiction.  They explained why the unhealthy mechanisms have negative consequences.  Members then had the time to break into groups and be creative and influence others to not use addictive substances. Two groups created a Spotify Play List that encourages self-confidence, empowerment, responsible choices, and an alcohol/drug-free lifestyle.  Another group made a meme that highlights the dangers of underage substance use.  Another group created a video that showed the dangers of drinking and driving.

Launch the media gallery 2 player
The Safe Center in Kearney presented a session on Healthy Relationships.  They covered a continuum of relationships between healthy, unhealthy, and abuse. They also provided signs and examples from each part of the continuum.

Peer Education Officers presented sessions on FCCLA National Programs. After viewing the presentations, members participated in the National Program Puzzle Activity. Members were given puzzle pieces to decorate with the answers to National Program questions and questions about FCCLA. The completed pieces were then fitted together to create a puzzle which is now on the hallway wall to the FCS Room at school.

Students enjoyed the day of sessions, ice breakers, food, and learning about FCCLA and current issues. Devon Tunender stated that “The healthy relationships session was my favorite because they described how the abusive person was acting and why it was wrong and what should be happening in healthy relationships.” Roni Prewitt added that

“The puzzle activity was fun and so were the ice breakers.”